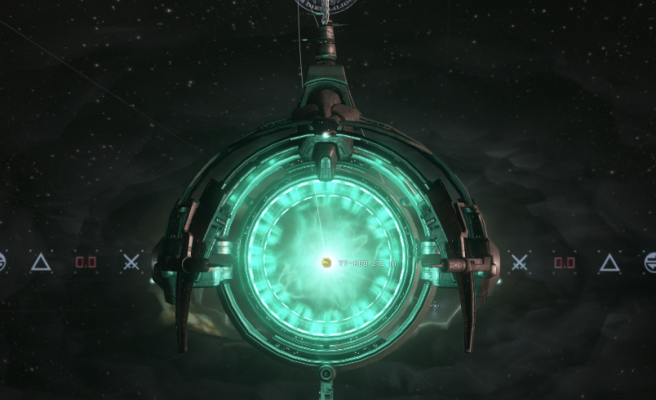 Julianus Soter, leader of the alliance GMVA and driving force behind the massive exodus from the Gal/Cal-warzone, was lately available for a short statement about the circumstances and motivation for this decision.

The simple fact is: There is not enough of a faction war ecosystem in the Gallente/Caldari lowsec area to sustain the activity and membership of a medium sized alliance or corporation. We had been struggling along in the past few months, scraping PVP activities from filament yeet fleets and nullsec roams, but there was no longer a real reason to stay in the Gallente/Caldari area. We have seen a marked decrease in PVP in any serious kind, and a serious decline in Caldari activity, that shows that we needed to move in order to sustain our alliance.

All alliances in eve need a unifying activity for their players to join together and participate with. There is no substitute in eve for fast paced, low-barrier of entry faction warfare pvp, when it is properly populated. It allows players of all skill levels, new and old, to participate and contribute to the success of your alliance and corporation, having fun and enjoying EVE the way it was supposed to be enjoyed. Not slide show presentation speed PVP in nullsec blobs with thousands of titans, but with every button click, every mouse movement, every tactical decision contributing to your success or defeat.

This kind of activity sharpens your mind and builds your sense of community. You learn every pilot’s name in your fleet, their voice, where they’re from, and what they like to do in eve. And you build real friendships that cross the span of continents and oceans, across the real world, and that last for years or decades.

That is the kind of thing that we need to preserve in eve, and it is something I fight for with GMVA every day. We need to rebuild our lowsec ecosystems and rebuild our communities. We need to strengthen our friendship in eve and in the real world. We need to make eve fun to play, no matter what you have in your ship hangar.

The Villore Accords will continue to do what we can to build our lowsec community, and having fun with the people we fly with, and getting fights wherever we can. See you out there.

Since my last post on this topic right after the christmas hiatus of my blog, I hadn’t much time playing EVE or go roaming (German: https://giantsecurecontainer.de/fahnenflucht). So I can’t give an impression of the warzone yet. GMVA already dipped their toes into the area and found a few good fights, which caught the local inhabitants by surprise. Although since then I saw different entities following and leaving the Gal/Cal warzone.

For more background and how the frustration about the warzone began almost 2 years ago read: https://thefederalfrontier.wordpress.com/2018/08/20/non-rp-an-open-letter-to-the-caldari-militia/