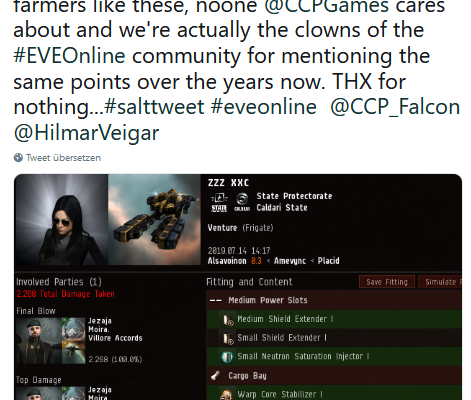 Last weekend I made a tweet on Twitter. I forgot about it a few seconds later. It was a #salttweet and it was one of the most viral and influential tweets in the EVE Online community for an entire week. It all began with a Venture on the Dscan in Alsavoinen.

I managed to kill the Venture, which was orbiting at the large site beacon at 30km max-range and doing what we call “defensive plexing”.
The killmail I posted on my Twitteraccount www.twitter.com/jezaja hadn’t even a warp core stabilizer fitted. It only had the WCS in the cargo. To be honest: I didn’t realize this.
I was just angry about yet another farmer in yet another Warp Core Stab Ship abusing yet another hole in the Faction Warfare game mechanics.

I think I drop Faction Warfare. It’s full of farmers like these, noone @CCPGames cares about and we’re actually the clowns of the #EVEOnline community for mentioning the same points over the years now. THX for nothing…#salttweet #eveonline @CCP_Falcon @HilmarVeigar pic.twitter.com/dJqznHFVF0

It was the ignition spark for the Eve Online community to jump into the breach, when Hilmar answered my #salttweet with a funny comment.

At this point a friendly “HTFU” from the CEO of CCPgames was encouraging enough for me to carry on. I marked the answer with a “Like”, forgot about the tweet and continued my business between the stars of New Eden.
Not the community. My Twitter-App literally exploded a few minutes later and continued to notify me about more and more mentions. The Discord-App on my smartphone (and tablet) joined the choir of rings and dings and after being mentioned on different Discord-Chats I knew that something bigger was going on here.
To be honest I actually WAS salty when I tweeted about “the” killmail. It was not the first one which made me really upset. Especially two things were my “main pain” for this tweet, which turned out to be one of the most viral EVE Tweets of the entire week when even CCP Hellmar himself showed up and dropped a reaction that can be mostly summed up with “HTFU”.
I. Warp Core Stabilizers 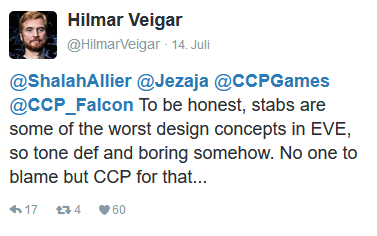 Bringing up the topic of Warp Core Stabilizers in EVE Online is beating a dead horse. Everyone know that these modules are mostly used to avoid a gameplay style which about 80% of the EVE players accept as natural consequence of the “dark harsh universe” of New Eden: the consensual PVP when you undock.. As many players in EVE exists nearly as many different opinions you get on Warp Core Stabilizers.
Celebrity players like Rixx Javixx and others (#metoo) demanding a rework for years now. Just limit them to industrials or something.
Warp Core Stabilizers have been banned from entering Faction Warfare Sites for a few month now. The problem is: The large Faction Warfare sites don’t have a gate. And so stabbed farmers moved their business and bots to the large sites.
II. Bring the player, not the farmer
The second reason was the player himself. With this name (zzz xxc) it is kinda obvious that this character was created for farming LP.
Don’t understand me wrong. I support the idea of having different characters fulfilling different roles. In EVE you can have as many accounts as you want and as your hardware can support. You can have a miner, a faction warfare member, an explorer or even a scammer in Jita 4-4.
The point is, that here a character is obviously kind of abusing bad game mechanics and used for afk-farming.There are plenty of killmails like this out there.

A good chance to catch those ships is to invest around 200 Million into Faction Warp Scramblers. Reward for the kill: 1 LP and Warp Core Stabilizers. RISK vs Reward is a bit…well…imbalanced.
Most farmers return just a few minutes later, with a new ship and just to continue the timer.
At this point everyone is consent, that things need to be changed – especially in the FW, which felt to be CCPs stepchild for a long time now.
In an AMA in March 2019, Hilmar made clear, that Faction Warfare “is not currently on the roadmap right now” (sic!) for the upcoming expansions.

To dive further into the topic I recommend you the Faction Warfare Committee Discord Server(https://discord.gg/7nAZJkP ) and tonight’s episode of Talking in Stations ( https://www.twitch.tv/talkinginstations ), where Matterall will speak with Matthew Dust and Torvald Uruz about the current situation.
My own alliance GMVA made paper for all things to fix: https://docs.google.com/document/d/1ygBGZnWFKYFi5xkwu-SJyZkonBBzk1k4yPEGmF6u7cM/edit
On 28th of July another episode is planned – this time with Hilmar Veigar Pétursson, CEO of CCP Games himself. I’m very excited about these ongoing discussions and really happy that the train gains a bit more speed again just by my tweet.
Thanks to everyone contributing to the Faction Warfare discussion with their ideas and enthusiasm! We’re on a good way!
Fly safe
Jezaja
PS: Follow me on Twitter!]]>