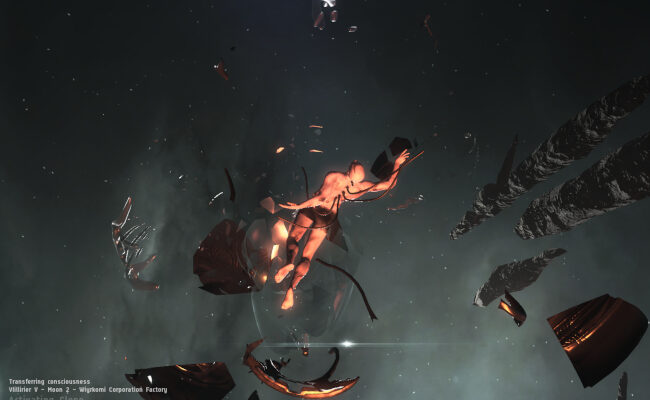 Death marks, rigor mortis and putrefaction or decomposition are secure signs of death. Unless a person also happens to be missing a head or other vital organ, two of these signs of death are enough for a doctor to determine that a person has died and to sign the death certificate. So let’s get started on a very special post-mortem check-up…

This month’s theme is actually one that has been EVE for 17 years. EVE Online is an MMORPG and doomed. But like the big top dog, the mainstream MMO World of Warcraft, EVE can also claim to have loyal players. But is that enough?

We can now sneer, but you have to be realistic. When EVE Online was launched in 2004/5, there was very little serious competition on the gaming market. The concept wasn’t completely new, but the implementation was flawless – even if many competitors didn’t want to hear that. Someone wrote “EVE is dying” in the forum at the time and blamed falling player numbers in the summer as an indication of the imminent demise of the space game.
I am more of the opinion that EVE has been dying since 2016.
(https://giantsecurecontainer.de/wir-schaffen-das ) At that time, CCP Seagul – Executive Producer of CCP Games – announced that free alpha accounts would soon be introduced in addition to the normal paid accounts. Alpha accounts have the great advantage of keeping in touch with your friends and give a good insight into the game.
But they also make an EVE career arbitrary and those who don’t want to play anymore just quit again instead of taking on the high learning cliff and continuing to play at least until the account expires. Surely EVE got more players through this, but at what price? Can a mystical new player experience change that? I am curious about your comments.

Without words.
Because I don’t understand what NFTs are and how they are supposed to advance civilisation. Blockchain, cryptocurrency…all cool. But NFTs? I just don’t get it and refer to a post I wrote last year: https://giantsecurecontainer.de/not-fucking-true-nfts-in-eve-online

Another meme is the “legacy” code that is always brought into play when it comes to changing a game mechanic or making it a bit more consistent. The continuous explanation “It’s not a bug, it’s a feature” unfortunately doesn’t get any better with the years.
Also the dropped further development of Faction Warfare, Wormhole Space and Pochven on numerous levels are signs that EVE is actually like a big witch’s house to which more and more rooms are added. But unfortunately, no one ever thinks of sweeping through one or the other of the old rooms or renovating them. Instead, the occasional door is dusted off from the outside and bugs are sold as a feature when the people who found them back then have long since stopped playing EVE.

I have come to call them the “forsaken AI”. In Pochven, you can observe some very special AI failures. Whenever Triglavian land on the grid with an enemy faction, they shoot around. That’s fine as far as it goes. But when the enemies are defeated, the survivors start to pick on each other until there are only a few ships left.

This can be used quite well for farming and is, among other things, a reason why the Pochven inhabitants are so incredibly rich (besides the multiboxing that is practised there).
Why after one and a half years there is still no patch for this AI? Whoever knows something about it can write it in the comments below. In any case, I haven’t found any indication that this site is being actively worked on. Why should they? After all, the many farmers in Pochven pay for their 20 golem accounts. Oops, did someone mention input broadcasting?

5. The ecosystem and the community

Let’s be honest. The overwhelming amount of other games is making it very difficult for EVE. Even if Bernd still thinks an X-Beyond the Frontier would be a good competitor with contemporary gameplay, other games with a more powerful marketing machine and player lobby have long since taken the butter off both the former German sci-fi flagship and EVE Online. Scam Citizen is getting money thrown at it because fans obviously can’t wait to rip off announced spaceships that don’t even exist virtually yet. Elite Dangerous, Dual Universe and even No Man’s Sky, which was so plagued at the beginning, are serious contenders against which Excel in Space has to hold its own. The hashtag #eveonline has long since stopped showing EVE content, but also Elite Dangerous and Star Citizen.
On the community side, too, you can see a change that is drifting very strongly away from what EVE used to be. Numerous “content creators” make videos or stream or write about EVE Online, but the quality is not always what you would want. Simple, meaningless gameplay videos, with no editing or storyline are uploaded. Copied posts from EVE University and again and again streams in which viewers are insulted and even racist and anti-constitutional statements are made – the list is long. Self-written blog posts are dying out, narrative narrated EVE videos are now one or two a year at most and streams look so arbitrarily the same that the few good ones are simply submerged in the white noise of trash streams.
The main thing is to get a fat donation – euros or ingame ISK, the main thing is to be compensated for the time sacrificed.

Times are changing. “EVE forever” is still an ambitious mission goal. But EVE must change. And the players have to change. A lot of things have to change before it’s clear that EVE doesn’t slide from one disaster to the next – unfortunately, it does at the moment.

I am very curious to hear your opinion. Of course, all comments will be entered into a draw for Scope Syndication Skins. So dig in and write your thoughts on the topic of the month!

18 thoughts on “BB: 5 reasons why EVE Online will die”