A Pochven Standing Guide can be summed up very simply with the following statement:“Kill everything that is NOT Triglavian and NOT EDENCOM.” That’s all you really need to know when riding out to do standing farming in Pochven. You can read a complete and detailed/comprehensive guide that really covers everything at EVE University. They can be understood with rudimentary English or translated into your language very easily with Google Translator.

Also very interesting is the ARC Guide to fuel the drifter doomsdays. “The Drifter Doomsday Challenge”

For another detailed guide on how to enter Pochven and what to do there, check out the Pochven entry manual

The Kybernauts, the Triglavian allies among the capsuleers, have also created their own guide, which you can find on their site: https://kybernaut.space/pochven

You can find all the important information in German about Pochven on the Braindead Zombies page, which is on the road for [PH]: German Pochven Guide: https://braindead-zombies.org/eve-pochven-triglavian/

They’re back. The ISBoxers who “back in the day” farmed the Sanshas Nation Incursions or “just wanted to fill up the fleets” are now out in Pochven farming either the EDENCOM or Triglavian Sites. This time it’s mainly Marauder fleets warping through Pochven and specifically clearing out the sites there and earning decent ISK for it. 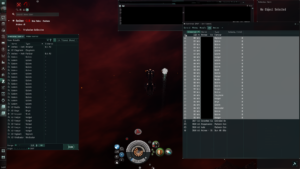 Several times in the EVE forums and on reddit and on Twitter and on many other channels on the Botting Heaven Pochven was pointed out. So really nothing has done, however. I sent a mighty bouquet of screenshots and videos to the CCP Security Team, now it’s up to CCP if they do something or not. Probably rather not…

Should the Triglavians be made even stronger? Should the botters be targeted? Or is Pochven so unattractive that the botters don’t bother there and at least provide a constant supply of Triglavian material? What is your opinion? Write it in the comments!