Last weekend, CCP organised an influencer marketing campaign for EVE Online. At first I thought it was a very exciting thing that certainly had a lot of potential. But then there were some sobering realisations and I thought about whether the concept should perhaps have been different.

Sendriss already wrote everything important about this campaign in his blog at the beginning of the week and many points will coincide with my “results”. It is therefore also recommended to read https://eve.subaruu.de/ein-doktor-im-marketing/.

For some years now, influencer marketing has been the new secret weapon when a company’s marketing is on the verge of missing its quarterly KPI. Quickly equip some Instagrammer with a jade roller and bang, the sales figures are back in order.

It felt something like this when CCP equipped several German Twitch streamers with an Omega account last weekend and let them loose on EVE Online.
For example, the Twitch streamer “dakieksde”, who was simply thrown into the shark tank and given “Play EVE Online” as homework.

He should spend at least 2 hours in New Eden and receive 25 clicks on his referral link, which then also please complete the tutorial.

Because something else was planned privately, “dakieksde” brought his stream forward a little and surfed ahead of the wave. The conditions for a successful sponsorship were not only the numerous viewers in the stream. Personally, I am always very cautious, especially with streamers who play games that don’t fit into their portfolio.
But here at least CCP has done its homework.

All the players had something with “space” in their offer. A very special case was streamer Fhexy, who didn’t even bother to change his stream title and actively promoted Star Citizen instead of EVE Online during the stream. For a paid advertising partnership, I find that disappointing. 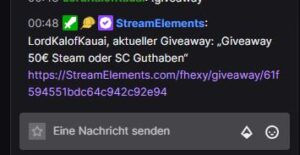 It is commendable that Fhexy had additional EVE Online players in voice chat who at least made an effort to give it some substance and gave it a little background, if that was at all possible.

In all honesty, I had to conclude that the principle of the learning curve and EVE Online always hit home.
So did “Goldgoblinnet”, who dryly stated that EVE is probably not a twitch game, but that he would definitely continue to play off-stream…yeah right. -.-

In the chat of a fourth streamer, the assumption was made that many of his viewers are perhaps only bots, as hardly anyone interacted in the chat, which is quite unusual with a viewer number beyond 800 and has parallels to another streamer who attracted attention a few days ago precisely because of this.

All this really leads to the question of how reliable the referral link clicks displayed were, which CCP made a condition of the successful sponsorship. With almost all streamers, you can watch the re-stream via VoD. Just watch how the number displayed above increases….

The problem was clearly that the numerous viewers of the streams only ever saw the same thing. Some guy is trying to create the new player experience. A better solution would have been to provide the individual streamers with prefabricated characters and match them TOGETHER with another EVE Online streamer, who then explains their respective profession to them. Exploration, mining, mission running, trading…all the great things you can do in EVE Online would have come up over the course of the weekend.

Did you see the influencer campaign? What do you think about it? What was good and what could be done better next time?