In the last weeks a lot has happened in the EVE Online community. The new partner program has started successfully. But apart from the program arranged by CCP there are more news. Jezaja’s Giant Secure Container is also cooperating with the European Space Agency (ESA) in the future and will have some exciting things in store for you, the reader…

Sometimes encounters in EVE Online continue to radiate for a long time. A few years ago I had a pilot in my corporation ‘turaagaq’ whose fascination with space has since become his workplace.
A few days ago I received an email from this former corp member. At first I thought it was a bad joke. But just one day later I received a phone call confirming the authenticity of the email and asking for an appointment confirmation. I was totally gobsmacked.
I hurried logging in to Microsoft Teams and found myself face to face with three people waving expectantly at me. The Press and Public Communications team of the European Space Agency, ESA called me.

Therefore, in the next few months, this blog will not only feature repeated exclusive insights into preparations for the next ESA missions, but also a guest blog post from German astronaut Matthias Maurer, who will be “our” next ISS astronaut. Already in the past I wrote about the ESA mission “Blue Dot”. 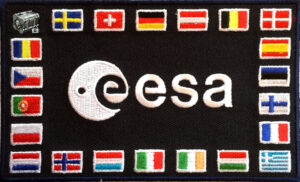 In addition, Matthias Maurer will wear a special patch for the upcoming ISS mission. On the common astronaut patch, on which all members of ESA are represented with their flags, there will also be a picture of Jezaja’s Giant Secure Containers. The container will stand in place of the British flag, which due to the Brexit are now no longer members ESA.

This variation is now also available in the ESA Shop, so you can order it online. The offer at the special price of 13,37€ is limited to April 1, 2021.
For european based capsuleers the program starts end of April. Write your capsuleer name in the comment section below an join an exciting visiting tour to ESA’s European Astronaut Center EAC!